The past year has been a difficult one for Mali. A military coup in March 2012 to remove President Amadou Toumani Touré led to nationwide chaos. Northern Mali was under the rule of various Islamist factions, from the Mouvement National pour la Libération de l’Azawad (MNLA) to Ansar Dine and local affiliates of the Al Qaeda in the Islamic Maghreb (AQIM), resulting in widespread tyranny replete with public floggings and the destruction of numerous tombs dedicated to Sufi saints, seen as idolatrous structures by followers of the militant interpretation of Islam. An international intervention to drive anti-government forces out of the north, led by France, and rushed presidential elections in August, meant that Mali was in the international spotlight for all the wrong reasons.

In early 2013, another distressing story emerged from the desert nation. One of the potential casualties of the insurgents’ authoritarian regime was Timbuktu’s collection of priceless ancient manuscripts, some hundreds of years old. After wresting the fabled town back from insurgents, French and Malian authorities found thousands of documents – stored in the town library, burnt or stolen. Fortunately, the majority of Timbuktu’s legendary texts are stored in private family libraries and were smuggled away to safety in a secret operation that had been going on for many months.

The manuscripts provide a window into the minds of the times’ leading thinkers as they pondered the meanings of their circumstances: 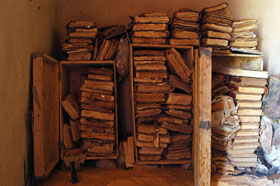 “There is absolutely no difference between the different human races, whether they come from Ham or another. It is possible that Noah’s curse, if it has fallen upon a certain number of Ham’s descendants, has not fallen upon all?” asks one.
[From the Mi’raj al-su’ud ila nayl hukm majlab al-sud or al-Kashf wa al-bayan li-asnaf majlub al-Sudan; composed in Timbuktu Feb 9, 1615.]

“God orders that slaves must be treated with humanity, whether they are black or  not; one must pity their sad luck, and spare them bad treatment, since just the fact of becoming the owner of another person bruises the heart, because servitude is inseparable from the idea of violence and domination, especially when it relates to a slave taken far away from his country,” posits another.
[From the Mi’raj al-su’ud ila nayl hukm majlab al-sud or al-Kashf wa al-bayan li-asnaf majlub al-Sudan; composed in Timbuktu Feb 9, 1615.]

Though saved from the torches and swords of the rebels, these manuscripts struggle to survive in Mali’s harsh climate; centuries of exposure to heat and humidity have rendered the scripts extremely fragile. There are several ongoing projects to digitize and preserve these documents, like the Tombouctou Manuscripts Project, which has been working with Timbuktu’s authorities since the early 2000s with support from the Ford Foundation and the University of Cape Town.

A recent addition to the preservation field, voveran ampule price full-sail, is trying to store manuscripts from the private libraries in humidity-proof footlockers to ensure they will survive almost any calamity. In a novel effort, the group resorted to an online crowd funding campaign rather than hitting up traditional funders like trusts and foundations for financial support. Led by Stephanie Diakité, a sustainable development professional, and working with Abdel Kadir Haidara of SAVAMA DCI, an association committed to allowing public access to Timbuktu’s private libraries, T160K managed to raise a little over $67,000 of its $100,000 goal in a month’s time.

In a telephone interview with Warscapes, Diakité explained why these manuscripts are so valuable. “They tell us about the evolution of African scholarship and Islam in the region…a rudimentary cataloguing of some of the documents revealed over 70 themes covering philosophy, math, poetry and even recipes, and they date back to the 11th century,” she said. Apart from their age rendering them delicate, these manuscripts are written in ferrous inks that have no fixatives and are extremely volatile, she explained, which is why the team uses a cold circuit photo digitization process to prevent them from igniting.

The idea of looking to the Internet for funding was unusual, and I asked Tony Dowler, head of the Indiegogo campaign, why the group didn’t stick to traditional funding sources. Citing slow bureaucratic procedures as one reason, Dowler said the real motivation for going digital was the hope of connecting with people directly, given the urgency of the situation. But it wasn’t easy.

“Our big challenge was that not that many people outside of Mali know what the situation of the manuscripts was; they weren’t aware of our need,” Dowler shared, “So from the beginning we planned to reach out to as many people as possible –through email, phone, social media, and the Web.”

After a few initial bumps and a lull in the campaign, the team took to Twitter and saw an exponential jump in their story’s popularity. 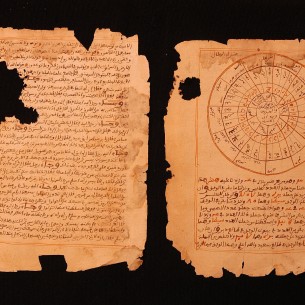 Asked about her thoughts on whether T160K was going to relaunch the Indiegogo campaign, and what they’d do differently next time, Diakité said they are working on a crowd funding model for other sustainable activities, while Dowler confessed they’d probably start preparing and planning earlier on in the process.

Courtesy of the funds raised online, T160K is now preserving about 600 manuscripts with silica inserts to protect them from humidity. (Another threat to artifacts around the world is the temptation to sell them to international collectors rather than preserve them locally, but, Diakité said, this isn’t a great concern in Mali, where the families feel very strongly about protecting their collections.

However, a sense of preserving one’s heritage isn’t the only factor involved here. Some of the texts deal with liberal views of Islam that don’t necessarily go down well with the more orthodox ideologies of insurgent groups who might try to destroy them. Consequently, Mali’s future economic and political stability also play a role in whether the manuscripts will continue being a source of knowledge for future generations.

The recently held election, though rushed due to international pressure, surprised many by its peacefulness and democratic outcome. Gregory Mann, African expert and associate professor at Columbia University, was skeptical of the turnout given that the polls were held during the monsoon and Ramadan, but conceded that the reported turnout figures were impressive, if accurate.

Newly elected president Ibrahim Boubacar Keita seems to have the people’s support and, with any luck, the new government will bring enough consistency in Mali to allow the manuscripts to end their seemingly endless journeys of survival and return to their original homes once and for all.